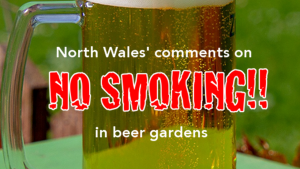 Craig K has set another Agree or Disagree on his show this week.  The feature which usually which works around a news story gives the chance for listeners to agree or disagree with a fictional statement, which is not one of Sound Radio 103.1 but there to create conversation.

This week Craig spoke about the news story regarding some councils in England banning smoking outdoors at venues such as pubs, restaurants, cafes and wondered whether Wales would follow suit.

So he put out the statement “Smoking should be banned in beer gardens in Wales” – Agree or Disagree ? tell us why.

Watch below some of the comments that went out on air live on Sound Radio 103.1.  Also continue the conversation below the video.

By continuing to browse the site you are agreeing to our use of cookies.